Lonoke, Arkansas – September 1, 2021 – Remington Ammunition has announced the next generation of Big Green’s iconic deer hunting ammunition, Core-Lokt. For generations, American hunters have relied on Core-Lokt to put meat on the table and mounts on the wall. Now Remington is proud to announce that The Deadliest Mushroom in the Woods is getting even deadlier. New Core-Lokt Tipped brings improved accuracy and terminal performance to deer and big game enthusiasts across the country and around the world. Multiple centerfire rifle calibers are shipping now.

Core-Lokt Tipped takes the Deadliest Mushroom long-range by offering new and improved accuracy paired with trusted Core-Lokt on-game performance. Thousands of rounds in development resulted in Core-Lokt Tipped’s combination of true flight and flatter trajectory with devastating terminal energy. This new ammunition is sure to be the choice of serious hunters and will be available in 13 popular calibers ranging from 243 Win. to 300 WSM.

“We’ve been talking about Big Green’s comeback all year and nothing says Remington like Core-Lokt.” said Remington Ammunition’s Director of Marketing Joel Hodgdon. “We have made many advancements since restarting the Remington brand and working 24/7 to get ammunition on the shelves. But this is the biggest news yet. Team Big Green can’t wait to get Core-Lokt Tipped in the hands of dedicated Remington fans that have depended on classic Core-Lokt for decades in the deer woods.”

Core-Lokt Tipped features the advanced technology of the Big Green polymer tip to improve ballistic coefficient, in-flight accuracy and initiate rapid expansion. When paired with an adjusted rearward center of gravity, Core-Lokt Tipped delivers match-grade accuracy for even the most demanding shots.

More information about Core-Lokt Tipped and Big Green ammunition can be found at www.remington.com or on Remington’s e-newsletter and social media accounts.. 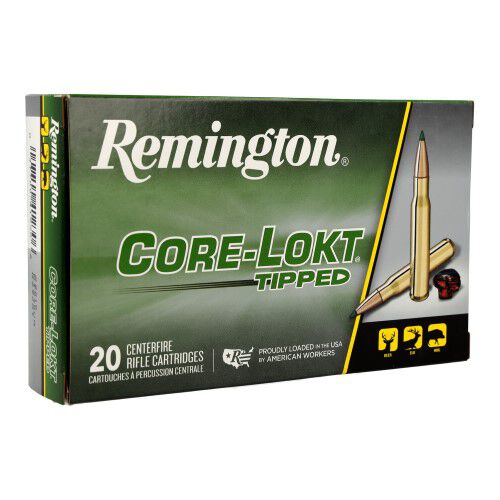